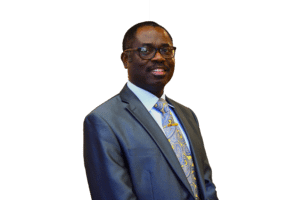 Nosayaba Evbuomwan, has been a passionate follower and disciple of the Lord Jesus Christ since his high school days. His commitment to the Lord Jesus Christ immediately thrust him into leadership, an involvement that continued throughout his college days at the University of Benin, Nigeria. While there, he was an active member of the Christian Union, serving in various capacities including two consecutive terms in the executive of the Christian Union.

Over the years since graduating in Civil Engineering from the University in 1983, he has been involved in ministry in various capacities in Nigeria, the UK and the USA. In 1988, he earned an M.Sc & DIC degrees in Concrete Structures from Imperial College of Science, Technology and Medicine, a prestigious college of the University of London. In 1994, for his work in Engineering Design, he was awarded a PhD in Mechanical Engineering from City University, London, UK. During the period 1988 to 1998, he worked in many capacities as an engineer, researcher and Lecturer in Structural Engineering and Design. From 1998 to date, he has worked as an IT (SAP) Consultant to Fortune 500 & 1000 companies in the USA as well as a Residential and Commercial Real Estate Developer and Builder.

He became founding pastor of Eagle Believers International Church in 2001. His singular passion is to oversee a church of ALL NATIONS. He was founding Board member and Faculty of Redeemers Leadership Institute (RLI), Columbus, OH, where he has been responsible for the development of curricula and teaching of several Leadership courses. He is highly regarded for the insightful and revelatory teaching gift of God on his life. His main forte is the spiritual development, growth and maturity of believers. In 2009, he published a book titled “The Glory of Unity”. He is married to Anne Funmi Evbuomwan, a minister of the gospel in her own right and their marriage of over 29 years has been blessed with two children Uyiosa and Demilade.